This document explains how to rip music from a DS game to 2SF file, a Portable Sound Format for Nintendo DS.

If you are going to rip a game that uses standard DS sound format (SDAT), you do not need to read this guide. You can use VGMToolbox to convert directly DS ROM to 2SF. I also recommend you to create NCSF instead of 2SF.

If it’s not the case, it requires a manual ripping.

You need to have a knowledge of some technical things:

In this tutorial, I will use the following tools.

The whole strategy for 2SF ripping is quite similar to my generic PSF ripping strategy, however, there are some points to be noted.

Open your ROM in NO$GBA. That’s the first step of your adventure.

Music playback request must be demanded by ARM9, so we will start exploring the ARM9 code, and we will not see the ARM7 code.

To load a ROM into IDA Pro, there are several methods.

If you have installed IDA Signatures Pack, then open Signatures subview, and apply all “nintendo ds” sigunature files. 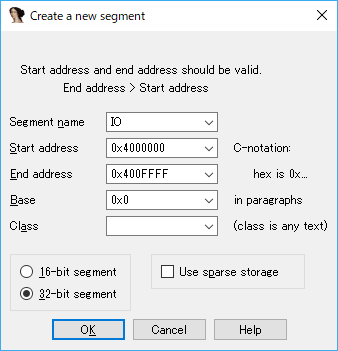 After reanalyzing program (Options –> General… –> Analysis –> Reanalyze program), the register names will be shown in the code. 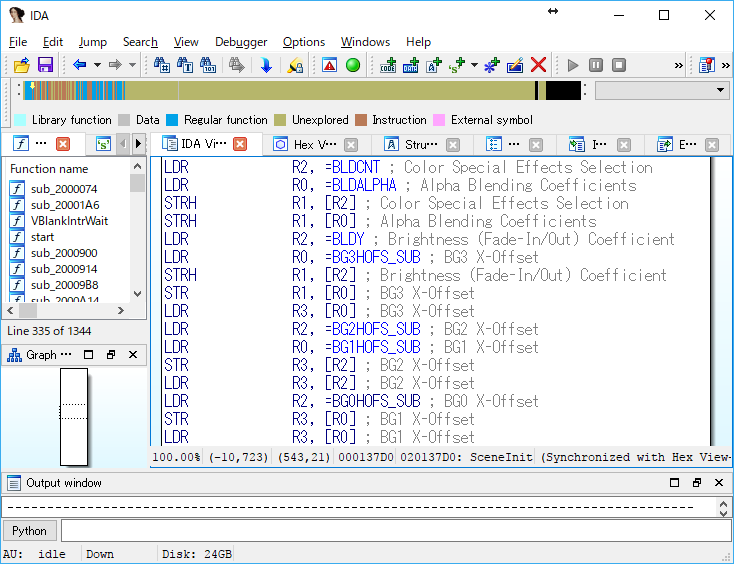 You can skip this for the time being. You can do this later, when you really want to do.

Overlay is a delay-loadable code block. Programmers can save RAM usage by switching the overlay corresponding to the scene. Despite the music routine is quite common, some games might have the music routine in an overlay rather than main code (e.g. Soma Bringer).

You can export overlays via Tinke (it’s under the ftc directory). Also, overlays are recorded in Overlay Tables (OVT). You can find the load addresses for each overlays from there.

Here’s the steps for loading an overlay in IDA: 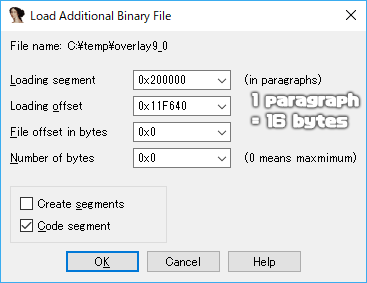 The following things are optional, but I suggest you to do the first.

You should view the filesystem and guess sound data is stored into what file. Tinke will show them in a friendly GUI. 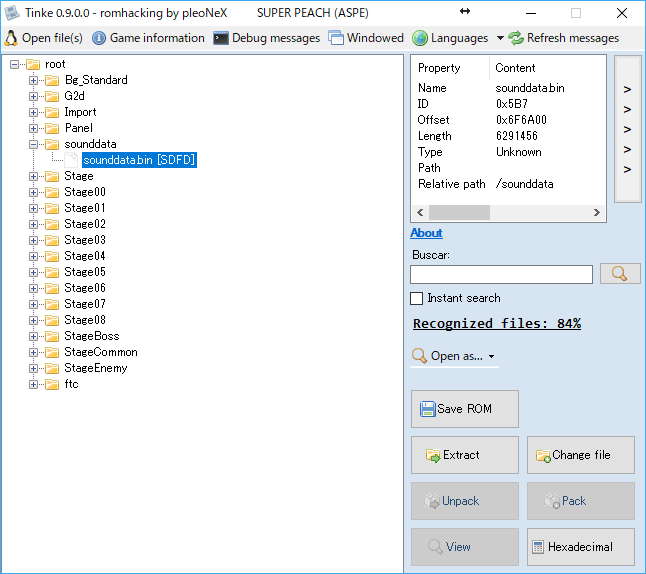 You can extract a file. You can also extract executable codes from ftc/arm9.bin and ftc/arm7.bin.

Since DS game has a build-in filesystem, we can find a code for opening a sound file easily, by finding a xref to the filename by IDA.

Note that opening a file is just a part of the sound code. Sound functions can be divided to some parts, like the following:

How a game select a song? How the sound data is stored to the filesystem? It depends on the game. Let me show some examples.

This game uses an algorithm to use a sprintf call before playing the ADX files. The sprintf values are thus:

At this point, we trace back to the calling function and we get this:

The strings are loaded to r1 and r2, and the sound digit is loaded into r4. Therefore, we write the song value to r4.

This sound select style could have used especially for an archived sound file, like SDAT.

Games using this sound select style are harder to rip as there is no obvious way to identify where the sound select value is actually given to the engine. A good place to start is to place breakpoints in functions following an initialization function which is obvious to locate (generic driver games all use a call to load a file such as sound_data.sdat).

A typical generic driver sound select looks like this:

In this case, both r0 and r1 were pointers. They may point to the classes which holds a sound select value, or pre-loaded song sequence itself.

In some cases, the sound select value requires you to trace back and keep inserting values into a register until the music changes.

I will explain more hints on this style later, because it’s more difficult than the name-based style.

So the first goal is to know what sound select value is used to specify the song. My favorite starting point is finding a score pointer for the specific song playback. I use DeSmuME for this RAM searching.

Note: If you doubt “Run to Sub-Return” working properly, you can confirm the LR (r14) register at the beginning of the function.

I usually write up a simple song-value lookup table like below.

Rarely, despite you have hacked the correct function and the song select value, the game may get stuck. I experienced that with the title screen of Super Princess Peach. Unexpected combination of conditions might cause such an unfortunate glitch. (IPC FIFO overflow, for example?)

You somehow managed to change the song on debugger, but you lack some informations to write a clear 2SF driver code, at present. In particular:

To investigate the prerequisites, I recommend to see what will disable the song playback, by NOP-out the function call nearby. I usually write a memo on the function call, like the following:

If a function is called so many times, you can disable by patching the callee itself.

At the same time, make your driver code and test inserting it to various locations (e.g. just after the song select code you look at, an earlier point in the main function, etc.) I usually write an assembly on my text editor, and paste it to NO$GBA by hand, line by line. (so clumsy!)

I will show my Super Princess Peach driver block below as an example.

In addition, V-Blank wait function is:

Save the change to ROM file by using a hex editor. NO$GBA is good for quick check, but it probably does not have a function to save altered ROM.

Filling the unnecessary function calls with NOP, as far as you can, will allow you to optimize your 2sflib more tightly.

The command above will produce foo.2sf. Can the 2SF be played correctly? Good!

Note: If you need to create mini2sfs which have more complicated parameter block, you will need to create parameter .bin files and batch convert them to mini2sfs, by using rom2sf with --load and --lib option. I personally use my private tool minigen for the flexible numbered .bin file creation.

Do they sound correctly? If so, it’s time to start optimizing your 2SF.

I suggest you to run trim2sflib with a single mini2sf first, then convert the trimmed 2sflib file back to NDS ROM, and view the NitroROM File System by Tinke.

In most cases, Tinke will show some non sound-related filenames. This is because the DS file library touches those FAT entries chunk by chunk, when it searches the sound file. Unless it is really loaded, the file content must be filled with zero.

Give your final shot to the optimizer, if you think your work is ready for the final optimization.

If you worry about the corrupted NitroROM file system, try modifying the FNT/FAT table by hex editor.

I hope this guide will help you in making your lovely rips!

Login to quote this blog

You cannot quote because this article is private.